Home » TIMELINE: Cybercrime Prevention Act of 2012: A Law 11 Years in the Making

TIMELINE: Cybercrime Prevention Act of 2012: A Law 11 Years in the Making 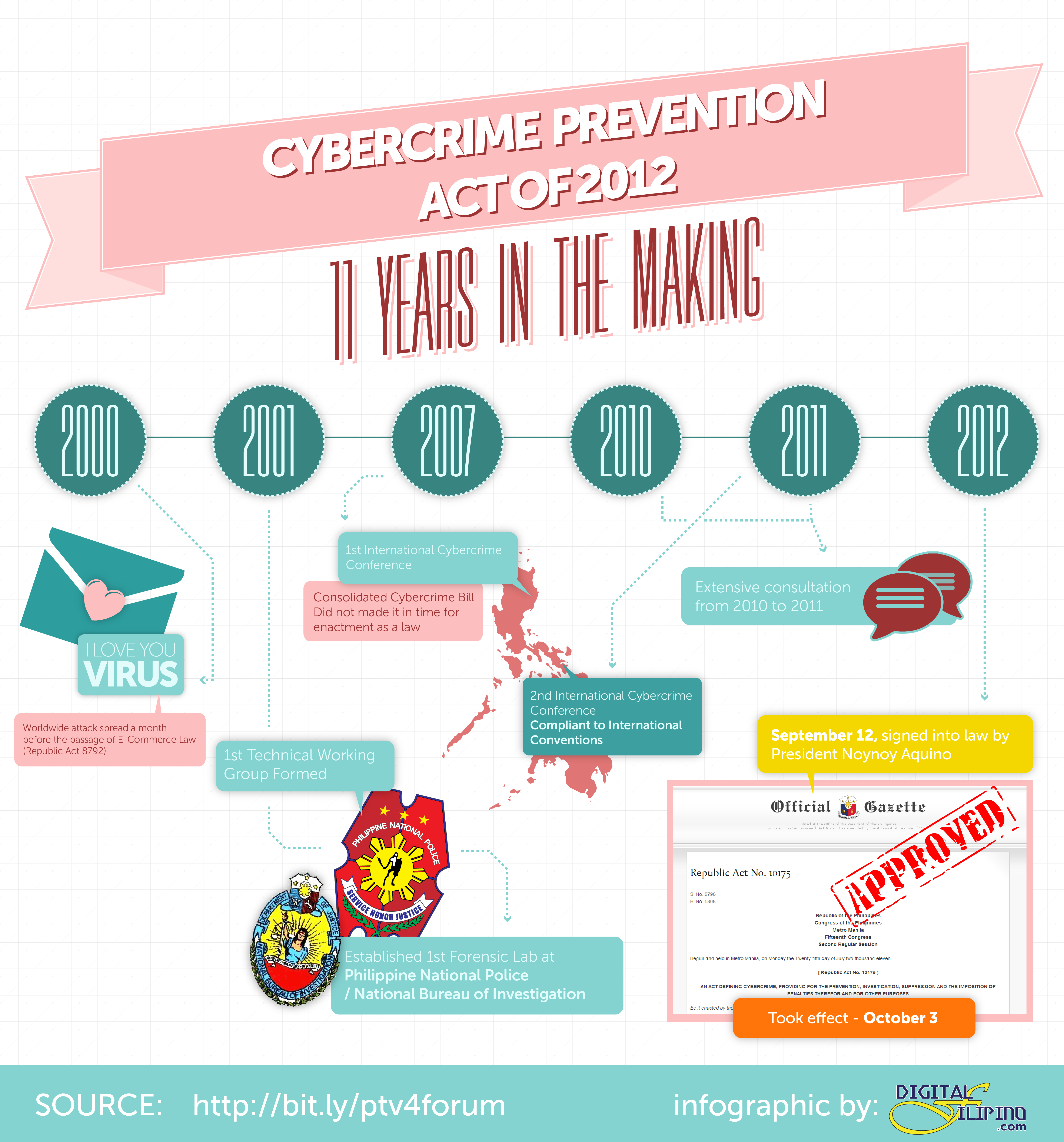 TIMELINE: Cybercrime Prevention Act of 2012: A Law 11 Years in the Making

When the controversial Cybercrime Prevention Act of 2012 was passed, there was an impression that this law was done in haste. But actually, the law was almost 11 years in the making.

Here is a timeline of developments that happened through the years involving the struggles of many in pushing for a cybercrime legislation.

When the E-Commerce Law (Republic Act 8792) was passed, the Philippines then was considered as one of the countries with advance legislation in prosecuting cybercrime. As the legislation was only passed last June 2000, it wasn’t able to prosecute Onel De Guzman who is believed to be the culprit behind the I Love You Virus as the cybercrime got committed a month prior to the law’s passage.

The I Love You Virus case brought us to the reality of how global cybercrime can be where prosecution in one country may not be sufficient when majority of victims maybe residing in another location. The said virus caused damage from US$2 to 5 billion.

Efforts in registering the Philippine Computer Emergency Response Team (PH-CERT) started with the support of the National Computer Center.

Nearly two years after the law’s passage, a growing number of hacking attacks and cybercrimes were recorded. Most victims do not file a complaint for lack of clarity on how the process works. Law enforcement was lagging behind due to lack of resources as the law did not specifically provided for it.

However, a Anti-Cybercrime bill (2001) was filed as early as then by former Congressman Eric D. Singson. In the Senate, Senator Ramon Magsaysay Jr. was also a supporter of the said legislation.

First Internet libel case filed when DotPH CEO Joel Disini sued Fernando Contreras Jr. of Philippine Domain Authority Convenors. Both parties used electronic documents against each other as evidence in court. The case was dismissed for lack of evidence.

Another Cybercrime bill was filed in 2003 that is seen as a complement to the E-Commerce Law and Intellectual Property Code.

A growing number of companies are coming out as well announcing cases they have filed against local scammers and hackers taking advantage of Filipino e-commerce sites. TSSI in 2003, with the cooperation of authorities, entrapped 3 suspected money remittance service fraudster who uses stolen credit cards to load money in the service.

With the growing number of crimes, organizations such as the Philippine Computer Emergency Response Team (PH-CERT) took on the advocacy of pushing for the passage of a Cybercrime legislation.

The growth of home-based workers and BPO industries further strengthen the need for a Cybercrime Law as it is seen a factor in contributing to the future growth of this sector. This is important as investors have a lot of choices in the region and having an efficient cybercrime legislation is seen as critical. Although most legislations around the world are local in application by nature.

On its 10th revision, the Cybercrime Prevention Bill was revised and covered cellphone transactions and anti-spam measures. The International Intellectual Property Alliance saw the Cybercrime bill as an important measure in fighting copyright piracy on the Internet.

In 2006, the enactment of a cybercrime legislation was also included in the country’s ICT roadmap.

The CICT took a proactive role in advocating for various laws such as the Cybercrime Bill. Various groups also participated in hearings and consultation on various ICT policies.

Growth in cybersex and child trafficking rings were noted. Worries that not having a Cybercrime Law will make the Philippines a haven for individuals engage in various cybercrime. The DOJ believes that the proposed law should not duplicate other laws to avoid giving an escape clause for offenders.

An International Conference on Cybercrime took place this year that paved the way for a consolidated Cybercrime bill. Internet piracy provisions were also considered.

However, as in the past years, cybercrime legislation was observed to be of low priority.

As the years and technology has evolved, the E-Commerce Law was deemed lacking in prosecuting a growing number of forms of cybercrime as technologies evolve. The lack of a law also unable the country to participate in conventions that intends to facilitate mutual cooperation.

It was noted 87% of emails Filipino received this year were spam.

Law enforcement was also becoming impatient as much is expected from them but the lack of law is preventing them from making progress. Although investigation methodology improvements were being made continuously.

Guidelines for Habeas Data came out this year.

Need for a Cybercrime bill got a renewed boost this year when the Katrina Hall and Hayden Kho sex scandal went viral as it involves computer theft and unauthorized access to information that got posted online.

CICT formed its own cybercrime unit.

Committee report on the Cybercrime Bill (report #770 resulting to Senate Bill 3553) were referred to the Committee on Rules this year. House Bill 6794 got approved. Legislators exerted effort to fast track it.

In 2010, Norton reported that 9 out of 10 Filipinos are victims of various forms of cybercrime ranging from hacking attacks to online scams.

PH-CERT also renewed calls for the passage of Cybercrime Bill. It was passed at the House of Representatives but got stalled in the Senate due to the election season.

Committee Report on Cybercrime Bill was submitted to the House of Representatives.

(in progress…. to be updated…)

Vigilance is Key to E-Commerce Growth

Eversince the Internet in the Philippines came about 6 years ago, a lot of people have spotted immediately on... read more

Thirty-three year old Jovel Cipriano has been working for IBM Philippines for the last 5 years handling its Visayas-Mindanao... read more

BIR: Preparing for the Challenges of E-Commerce

With the recent promulgation into law of Republic Act No. 8792, The Electronic Commerce Act (ECA), which provides for... read more

Thriving in Gift-Giving: The FilipinoGifts.com Experience

Despite the fact that the country is pushing itself as an IT E-Services Hub to the world, the agricultural... read more

Here are some of our articles covering Internet and e-commerce developments. Viral Ideas October 29, 2009 LAST Tuesday night, I had a... read more

These are the articles I've written on e-government developments. E-Commerce Policies and E-Government Growth in the Philippines (handout) Speaker: Dir. Maria... read more

Digital Marketing and E-Commerce Boot Camp for the Tourism Industry