Home » Events » Live2Lead: Save The Children

Live2Lead: Save The Children 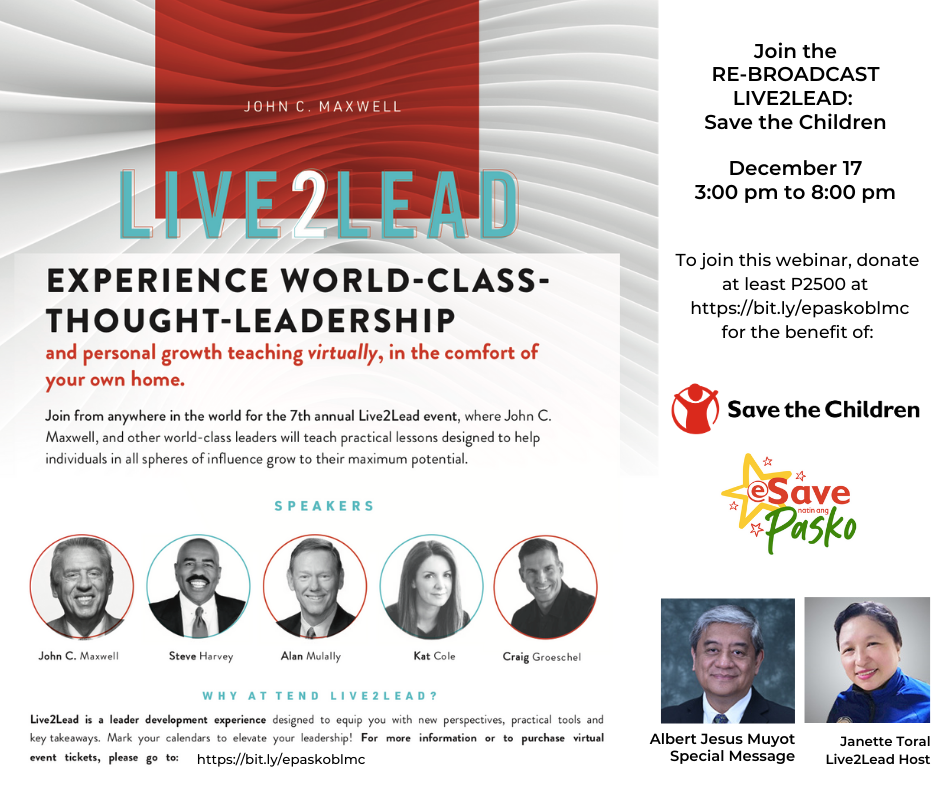 Live2Lead: Save The Children

It’s our privilege to invite you to the rebroadcast of LIVE2LEAD: Save The Children . It will be taking place this December 17 from 3:00 pm to 8:00 pm (GMT+8) via webinar.

This is organized by Live2Lead Host Janette Toral. Donors who have given at least P2,500 to Save The Children Philippines – eSave Natin ang Pasko will get a slot for this event.

Live2Lead is an annual global leadership event with world-class leaders. Created to share leadership principles and personal growth techniques so you can go and CHANGE YOUR WORLD!

Speakers include:
1. John C. Maxwell, the #1 New York Times bestselling author, coach, and speaker who has sold more than 30 million books, has been identified as the #1 leader in business by the American Management Association® and the world’s most influential leadership expert by Business Insider and Inc. magazine.

2. Kat Cole is the COO of FOCUS Brands North America. Prior to FOCUS Brands, Kat was President of Cinnabon, Inc. and a Vice President at Hooters at age 26, making her one of the youngest executives in chain history. She has been featured in The Wall Street Journal, The New York Times, Forbes, Fortune, Cosmopolitan, and many others.

3. Steve Harvey is known as the busiest man in Hollywood. But when he’s not entertaining, he’s a dedicated mentor and motivator. Mr. Harvey’s passion is helping people, which led to the Steve and Marjorie Harvey Foundation, helping underprivileged children receive the tools for success.

4. Alan Mulally served as president and chief executive officer of The Ford Motor Company and as a member of Ford’s board of directors from 2006-2014. Mulally led Ford’s transformation into one of the world’s leading automobile companies and the #1 automobile brand in the United States.

5. Craig Groeschel and his wife, Amy, started Life.Church in January 1996 and it has grown to include dozens of locations all over the United States. Glassdoor has also named him in the top 10 CEOs in the U.S. (small and midsize companies) and named Life.Church the #1 Place to Work under his leadership.

Save The Children Philippines CEO Atty. Albert Jesus T Muyot will also give a special message.

CLICK HERE TO GIVE P2,500 TO Save The Children Philippines – eSave Natin ang Pasko TO GET A SLOT FOR THIS EVENT.